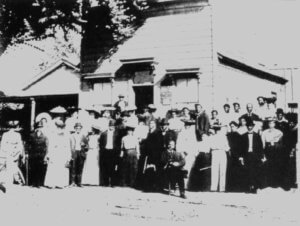 Antioch Baptist Church is one of the oldest African American Baptist Churches in the South Bay area. In 1996, Antioch was added to the Historical Landmark inventory for the City of San Jose by a unanimous vote of the City Council.

Antioch Baptist Church has a rich history and continues to produce leaders within the community.

The Historical and Archival Committee of Antioch Baptist Church was formed during the Centennial Celebration of the church in 1993. Its charter is to gather and preserve the history of Antioch and its members. The Committee meets on a regular basis to catalog and file the historically significant materials gathered by Antioch’s member and friends.

The Antioch Baptist Church of San Jose, California, the oldest African American Baptist Church in San Jose, was established August 2, 1893. The Church was founded with Reverend Cyclades C. Laws as the first pastor of the church. He would be the leader of a small group of Christians who found the need for stability and a place of worship for black Baptists in San Jose. Antioch Baptist Church was established in a wooden, false front structure at Sixth and Julian Streets. This small structure could accommodate 40 worshippers. The founding of the civic pueblo of San Jose in 1777 included five Mulatto families who were the first settlers in this small settlement. During the period of 1777 through 1849, there were small groups of African Americans who came to San Jose. Early census records indicate that they were farmers, barbers, stablemen, domestics, laborers and ministers.

Several early families of San Jose assisted in the formation of Antioch Baptist Church. They also had connections with First AME Zion Church of San Jose. The founding of Antioch Baptist Church and subsequent documents are replete with the importance of God and family. Our early ancestors have provided the church and the community with a legacy of love, hope, faith and charity.

The City of San Jose has many early settlers that are little known yet they contributed to its development. The nineteenth century was an interesting time for people of African descent in California. There were economic; social, and political changes that were taking place throughout the state. Little is written about African Americans, yet, our contributions and presence is documented by few historians, private collections, church records, diaries, private and public documents.

A small population of African Americans lived in San Jose prior to the Gold Rush. It is significant to note that the families that lived here were connected with each other in some manner. Some of the early settlers that came to San Jose were slaves who traveled with white settlers to the west, while still others were free men and women. The status upon arrival in California for many African Americans was sketchy and there was a lack of clarity. In depth research indicates that arrival by covered wagon, boat, scout, or on horseback was often how we came to California.

In 1908, the growing congregation built a new structure, which could accommodate 150 worshippers at the same Sixth and Julian Street location. The second church structure would serve the San Jose Community for over 50 years.

Following World War II, there was an influx of African Americans to San Jose, and the congregation grew. On Easter Sunday of 1963, Antioch held a dedication ceremony at the new Church. The church at the same location would build a new church.

In 1993, Antioch gathered and celebrated 100 years of service to San Jose’s African American community and the City of San Jose.

Antioch Baptist Church is still happening even though our building is closed!
Our Response

Made with ❤ for Antioch Baptist Church